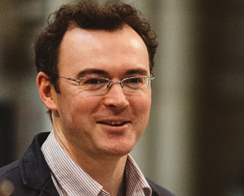 Christopher Gray is Director of Music at Truro Cathedral where, alongside being responsible for the celebrated ‘Father’ Willis organ, he directs the cathedral choir. As well as singing at seven services each week, the eighteen boy choristers, eighteen girl choristers, seven lay vicars and five choral scholars undertake regular concerts, broadcasts, webcasts, foreign tours, and CD recordings. In recent years the choir has appeared on BBC1, BBC2, BBC4, and ITV, as well as taking part in regular live broadcasts on BBC Radio 3. Recent recordings have included critically acclaimed single-composer discs of music by Benjamin Britten, Philip Stopford, and Gabriel Jackson, with a Christmas DVD released in the last few weeks. He has commissioned a wealth of new music for the choir, with significant works by some of the UK’s leading composers, including Paul Drayton, Graham Fitkin and James MacMillan.

Christopher Gray was appointed to his current role in 2008, having previously been Assistant Director of Music at Truro. In addition to his duties at the cathedral, he directs Three Spires Singers and Orchestra with whom he has performed most of the mainstream large-scale choral repertoire, including Britten’s War Requiem.

A Fellow of the Royal College of Organists, Christopher Gray has appeared as organist with the cathedral choir on numerous radio and television broadcasts and CD recordings. He has performed across Europe as well as on many of the finest organs in the UK.

He was born in Northern Ireland where he received his early musical education. Whilst in the sixth form at Bangor Grammar School, he became Assistant Organist at St George’s Parish Church, Belfast. At the age of eighteen he moved to England to take up the organ scholarship at Pembroke College, Cambridge, where he read music and studied the organ with David Sanger and Nicolas Kynaston. He was subsequently appointed Organ Scholar at Guildford Cathedral while studying with Margaret Phillips at the Royal College of Music where he was a post-graduate student and a prize-winner.

In his spare moments Christopher Gray enjoys taking advantage of all that Cornwall has to offer, in particular its outstanding surfing conditions and local ales.