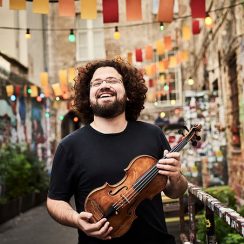 Jonian Ilias Kadesha has Greek-Albanian roots and lives in Berlin. The young musician not only speaks Greek, Albanian, German and English but also has a keen interest in philosophy and rhetoric. His playing is characterized by stylistic accuracy and exactness in his articulation, in the interpretation of early to contemporary works. With boundless sound imagination Kadesha is always in search of something new.

He is a prizewinner at Deutscher Musikwettbewerb, Windsor International and the Leopold Mozart Violin Competition.

The young violinist recently made his debut with the Scottish Chamber Orchestra in the Tivoli Copenhagen, with the RTE Orchestra at the National Concert Hall Dublin, the Royal Philharmonic Orchestra, the New Russian State Orchestra under Yuri Bashmet and the Chamber Orchestra of Europe at the Kronberg Festival. Kadesha made his debut with the Athens State Orchestra in autumn 2019 performing Skalkottas’ Violin Concerto, whose Small Suites he has recorded for CAvi-music together with works by Enescu and Ravel.

​His next recording project together with cellist Vashti Hunter, in cooperation with Deutschland Radio, will be published by CAvi-music in the spring of 2020 and is dedicated to works for violin and cello by Honegger, Skalkottas, Xenakis and Kodaly.

Chamber music connects him with renowned musicians such as Martha Argerich, Steven Isserlis, Nicolas Altstaedt, Thomas Demenga and Gábor Takács-Nagy, Ilya Gringolts and Pekka Kuusisto. He was also heard in Kronberg’s Chamber Music Connects the World and the Verbier Academy Festival. Jonian Ilias Kadesha is co-founder of the award-winning Trio Gaspard, which is a regular guest at festivals and music centers in Europe and the United States.

​Kadesha studies with Antje Weithaas at the Kronberg Academy. His previous teachers included Salvatore Accardo, Grigori Zhislin and Ulf Wallin. He studied chamber music with Hatto Beyerle in Hannover and at the European Chamber Music Academy. Masterclasses with Ferenc Rados, Steven Isserlis, Ivry Gitlis, Leonidas Kavakos and Eberhard Feltz complete his studies. Since 2018, Kadesha has been supported by the Young Classical Artists Trust in the United Kingdom.